The Hidden Gems of Cincinnati

The Hidden Gems of Cincinnati

In the heart of Cincinnati lies a gem few people know about. Residents and visitors alike often miss this unique Cincy treasure because of its odd location. startup domain name generator . A bustling city full of sporting events, music, museums and a wonderful children’s zoo, Cincinnati is home to a massive work of art hidden in an unlikely place and often missed by tours. . Tucked inside of the John Weld Peck Federal Building is a spectacular mural created by Charley Harper.

A Portrait of American Wildlife

This enormous ceramic tile mosaic displays a menagerie of colorful beasts and wild things. Beautiful images are spread over two walls measuring 18’ by 10 ½’ each. Illustrated in the iconic style of Charley Harper, over 100 easily identifiable species are splashed across the tiled walls. 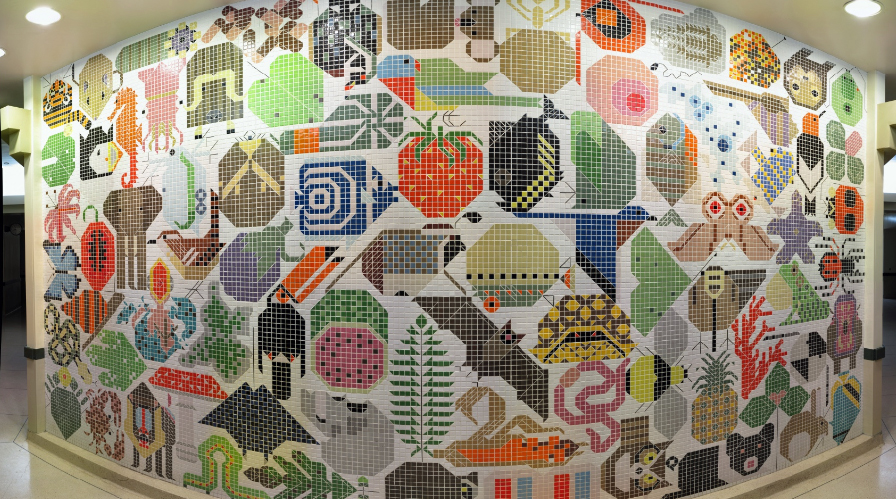 Charley Harper created this mural in 1964. Similar to the approach of his “Tree of Life” piece, Harper captures the busyness and activity of nature and the vast number of animals that share our planet. A chart nearby the mural lists each animal with a diagram of where they can be found in the scene.

A creative use of color and pattern intensifies the appearance of each animal without losing its true identity. By staying true to nature’s colors and being careful to only apply artistic license when appropriate, Harper is able to produce interesting and accurate work. He maintains shape and proportions, while flattening and simplifying each animal. This creative approach to natural illustration is quickly understood and translated by the viewer’s eye.

While a rare medium in his work, the tile lends itself to his illustration style. The bold, straight-line approach was used by Harper as a no-nonsense way to further simplify and flatten his illustrations. A limit of 50 colors keeps the mural unified and consistent in appearance.

Other Murals by Harper

While the “Space Walk” mural is not available for viewing, the American wildlife mural in the Federal Building and “Web of Life” at Miami University are both publicly available for display. Discover this unique part of Cincinnati’s history, and experience the work of Charley Harper.
Sources: